When you translate content into several languages in Joomla!, what you are doing is creating a different item for each language. Each item is assigned to a language and has the same content (translated) that another item in another language. For example, suppose you have a website with three languages, English, Spanish and French. For each content (category, menu, banner, article ..) you have to create three items, one for English, one for Spanish and one for French. And these three elements are related and have many things in common.

Hovering over each of the icons contained in these language columns you will see an explanatory text about its content and where appropriate a description of the action that will be taken when you press that id or image. Clicking the little down arrows, an information window with less frequent actions will be displayed.

The Set Status indicates the current status of the set of translations and is identified by one or two images. When hovering the mouse over a image, a text is displayed as follows:

This state has two possible causes:

The set of translations has been completed when it contains as many translation id's as published content languages, and also all such id's are published (This depends on the value of the configuration option "Include published elements only for "Completion" of a Translations Set"). As you can see in the example above, when you hover over the status image, the status and the completion date and time will be shown.

The status "Modified" means that after completing the set of translations, at least some element of the set has been modified using the KMFasTrans edit form or the native Joomla editing form or the front-end editing form.
If the change is permanent, you can change the set status to "Completed" by clicking the checkbox in the row and the toolbar buttom 'Mark Set as Completed'.

If you changed the status of the modified id to unpublished, by changing later on its status to published, the set status will also change to "Completed"(depending on the value of the configuration option mentioned above).

By clicking on the button that contains the set number you will get the following screen with the contents of the set:

The first five lines show attributes of the Translations Set:

The list below the first five lines contains the elements of the set. The values for the columns are self explanatory.

When you start using KMFasTrans the only existing translations sets are those created during the KMFasTrans installation, based on the existing Joomla associations at the time of installation. This may include Articles, Categories, Contacts, Menu Items and Newsfeeds, but does not include others such as Banners, Modules, Fields or Tags.

Apart from the previous ones, translations sets are automatically created when creating or editing element translations. Let's suppose for example that we start from an element without translation like 'Blue Mountain Rain Forest' represented in the following screens:

We can click on the 'Create' button on the French column to create a translation of 'Blue Mountain Rain Forest' into the French language, or

we can click on the 'Edit/Create' button on the 'Actions in all selected target languages' column to create a translation of 'Blue Mountain Rain Forest' into the French language, Italian language and Spanish language simultaneously.

In both cases we will obtain the KMFasTrans editing screen, in which we can create an element (article in this example) translation of the source element, in one or more languages simultaneously. When saving the elements, a set of translations that will contain the source item and all target items, will be automatically created. All equivalent Joomla! associations will be created simultaneously.

(For a detailed description of the use of the edit screen visit KMFasTrans New / Edit Translations Help).

The following screens show the situation after creating these elements:

And clicking in the translations set number 274 we get this details screen:

We can also create Translations Sets manually. If we have an item in a language that is the translation of the same content in another language, but they are 'isolated' we can create a Translations Set with both items.

What we have to do is click on the 'Associate' link of the column of the language in which is the item with which we want to create the set. In the following example we will associate an item in French language to the item 'Blue Mountain Rain Forest' in English:

When we click on that link we get the following screen:

We choose the appropriate item (in this example the only one 'Forêt tropicale de montagne bleue') and by clicking on the title, the set of translations will be created and we will obtain the following screen:

where we can see that a new set of translations has been created with number 275 that contains the source item (id = 64) and the newly associated item in French language.

If we hover the mouse over the Edit button in French we will see a popup with the title of the newly associated element.

Warning: the drop down list "Select Association:" must be set to "Not associated" to show only items that do not belong to any other set of translations. If you choose the value "Select Association", the list will contain all items in that language, whether or not they belong to another set of translations. In this case for each associated item you will see an association icon in the column 'Association' and you can see its associations by hovering over the icon. If you choose an item that already belongs to another set, such item will be disassociated from that set and associated to the set you are creating or updating.

The next screen shows how the previous screen would look if we had selected '- Select Association -' as the value of the drop-down: 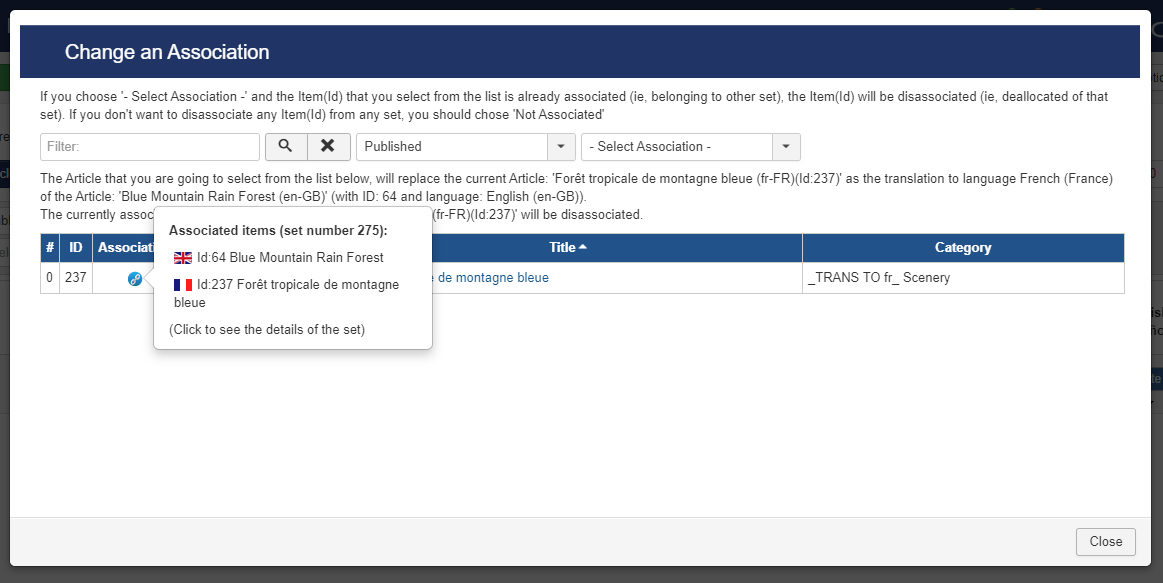 Modifying and deleting a Translations Set

This site uses cookies to manage authentication, navigation, and other functions

If you continue browsing, we will understand that you accept its use. If you need more information you can view the e-Privacy Directive Documents here